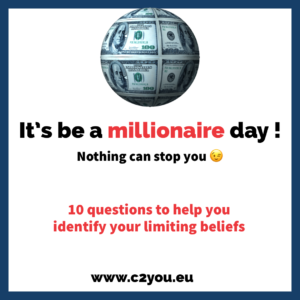 10 Questions To Help You Identify Your Limited Beliefs

So Nothing can stop you!

During the first 6 or so years of our life, we soak up everything we hear and our young brains believe it to be true. During these years we develop our most powerful, and often times most life-limiting, beliefs that can stick with us for the rest of our lives.

We keep it in our subconscious, and it’s there to keep us safe. It’s how we learn that the stove is hot because it burnt our hand, or how we know to look both ways before crossing the street because our parents drilled that home with us every single day.

However, some of these beliefs hold us back in life and keep us in a state of fear and/or ignorance. Typical limiting beliefs take the form of:

Here are 10 questions we can ask ourselves that will help us dig deep into our subconscious and identify our limiting beliefs.

1.  What belief has held you back the most? It might be hard to identify all of our limiting beliefs, but we can all pinpoint at least one belief that has held us back throughout our lives.

It might not be obvious for the moment, but if we look back on the things we’ve done, we can usually see it.

Maybe you missed out on asking your future wife or husband on a date because you knew she/he was “out of your league.”

2.  Why do you believe this? Now that we’ve identified our biggest limiting belief, ask yourself this question until you run out of answers. Maybe something happened to you when you were a child. Maybe something happened to you last week. Maybe you’ve just never been told it’s okay.  Write down every answer you come up with so you don’t forget them.

3.  What evidence proves your belief wrong? Most beliefs are just that,….. beliefs. Beliefs and facts are two very different things. Snow is cold. We know that because we can feel it. There’s no debate to that fact. It can be measured.

The fact that you believe you aren’t smart enough for that job is subjective and just your opinion. There’s no way to prove it with 100% certainty. If you look hard enough I’m sure you can find someone not as smart as you doing exactly what you want to do. The only thing stopping you is your belief.

4.  What have you missed out on in life because of your belief? Sticking to the job example, how different would your life be right now if you had applied for that job? Your life would most likely be completely different. Even if you applied and didn’t get it, you could’ve learned something valuable. If nothing else, you would’ve learned that it’s okay to try and fail.

5.  Is there any truth in your belief? Is there truth to your belief? Has something happened to you recently to reinforce the belief? Or is it something you’ve believed for as long as you can remember and you don’t really know why?

If you can’t think of anything to confirm your belief that has happened within a year, it’s time to reevaluate. And be sure not to put too much weight in the opinions of others.  They also hold limiting beliefs that they project on others.

6.  Question its impact. What happens if you challenge your belief? Let’s say you wake up one morning and tell yourself you’re not going to let that belief control your decisions anymore. Does your life change for the better?

Do you allow yourself to do things that you’ve never done before? Do those things change your life for the better? Usually, the worst thing that can happen is a failure.  And even when we fail, we wake up the next morning with another chance to try again.

7.  What are you afraid of? What’s the worst possible thing that could happen if you challenge your belief? How does this change your daily life? Most of our fears boil down to being rejected, humiliated, embarrassed, isolated, and so on. How debilitating would these things be if they were to happen? Is bettering your life and giving up the belief worth the risk?

9.  What would you have to give up if you overcame this belief? What part of yourself would you lose if you gave up your belief? Would it be missed by you or the people around you? Would it make you a better person? Would it move your life in the right direction and create more opportunities? Sometimes our biggest fear is the fear of being more than we ever thought we were capable of. Make sure you aren’t holding yourself back on purpose.

10.  What would you gain if you overcame this belief? How much better would your life be if you simply stopped believing in something that has no weight to it? Think of the freedom you could gain. Think of how much happier you could be. Would you even be able to make the lives of people around you better if you were to overcome this belief? Most success and happiness is just on the other side of a negative belief. Make sure you aren’t keeping yourself from getting there.

Ask yourself these questions whenever you find yourself thinking “I can’t” or “I shouldn’t” or “I don’t deserve it.”  Make sure that thought is the reality and not just a limiting belief that’s holding you back.

So nothing can stop you now!

stay informed
at all times

Let’s Talk! We’d Love to Hear from You